Grant Fisher has been one of the nation’s outstanding young distance talents for several years – from his stunning performances at the 2013 World Youth Championships, to his domination of the prep cross-country scene his junior and senior years, and then to earning All-American honors 12 times at Stanford. Now Fisher, one of the newest members of the Nike Bowerman Track Club at 22, will join us at the Great American XC Festival Saturday, Oct. 5, to sign autographs and meet and greet athletes and fans. 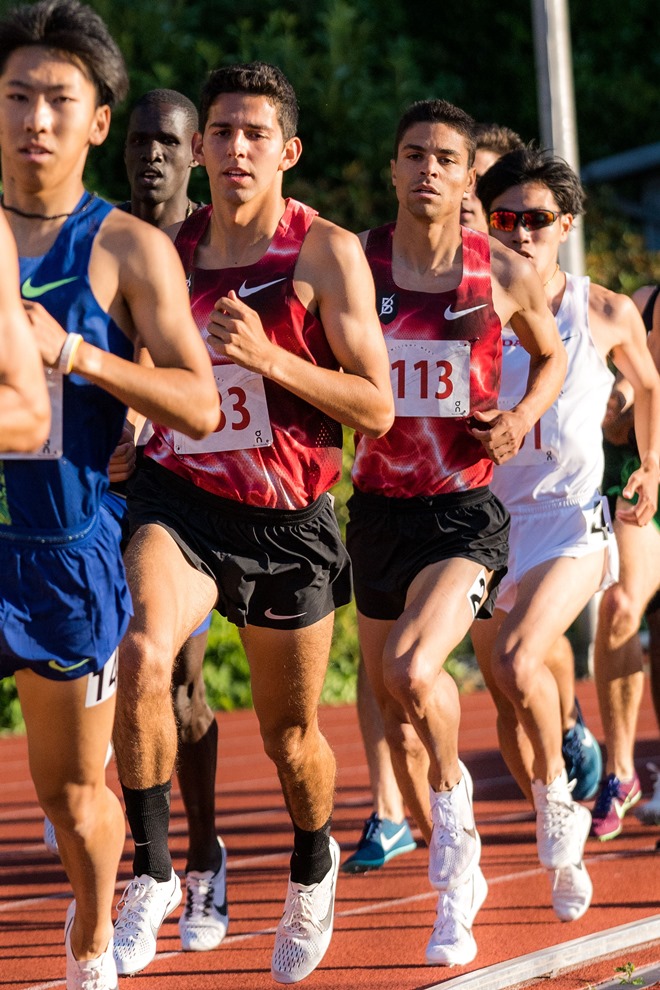 Each year since Nike partnered with the NSAF for the GAXC Festival in 2016, it has brought in elite pro athletes to be part of the festivities – including Mary Cain, Courtney Frerichs, Craig Engels and Shelby Houlihan. The latter three, in fact, are all in Doha this week representing Team USA at the IAAF World Champs. Fisher has already twice represented his country in competition – he ran the 1500 at the 2014 World Juniors in Eugene – and will very likely contended for Olympic and World team berths in the years ahead.

Photo at right: Fisher (3rd from left, in front of Matt Centrowitz) during a race this summer (credit: Bowerman Track Club).

Fans still remember in 2013 when Fisher, then having just completed his sophomore year at Grand Blanc HS in Michigan, made the U.S. Youth team and then in his 1500 heat in Donetsk, Ukraine, stunned the track world by winning in 3:50.30 and making the final – ultimately taking 9th. Suddenly all prep distance fans knew who Fisher was and he didn’t disappoint the following season in XC – winning the first of two Gatorade National XC Runner of the Year awards. In fact, he was unbeaten in both 2013 and 2014.

From Fall, 2015 through this past spring, Fisher enjoyed a stellar XC and track career at Stanford. As mentioned above, he earned a dozen All-American titles, including winning the 2017 NCAA Outdoor 5,000m with a ferocious kick in 14:35.60. The past few years he had a fierce rivalry with Wisconsin’s Morgan McDonald and had four top-3 NCAA finishes over various distances.

“I’m really thankful for all of the people who helped me get here,” he told DyeStat.com in an July interview after joining Bowerman TC. “I’m really happy with where I am. To reflect back on being a little kid dreaming big, what it would be like to run and that be your job, run and be with your friends, that’s the dream.”