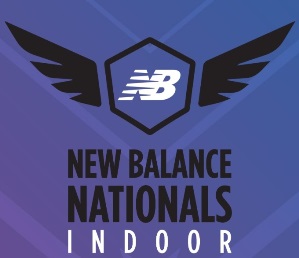 The National Scholastic Athletics Foundation (NSAF) and its medical staff, led by Dr. Robert Jones and in direct discussion with the Center for Disease Control (CDC), made the decision to cancel the 2020 New Balance Nationals Indoor (NBNI), which was to take place at The Armory March 13-15.

“Due to the Coronavirus (COVID-19) outbreak and out of concern for the safety of all athletes, coaches and families, we’ve decided it’s in the best interest of all parties to cancel the meet,” said NSAF and NBNI Meet Director Jim Spier. “It’s the hardest decision we’ve ever had to make.”

Loudoun Valley's 4x1 mile relay broke its own HSR, the 2nd of its pair of records and of its 3 victories. Photo(s) by John Nepolitan (all on this page).


If it was records you wanted at the 2019 New Balance Nationals Indoor, you had plenty of those -- 25, in fact -- including 2 national and 14 new meet standards. But if you also wanted thrilling duels, harrowing finishes, 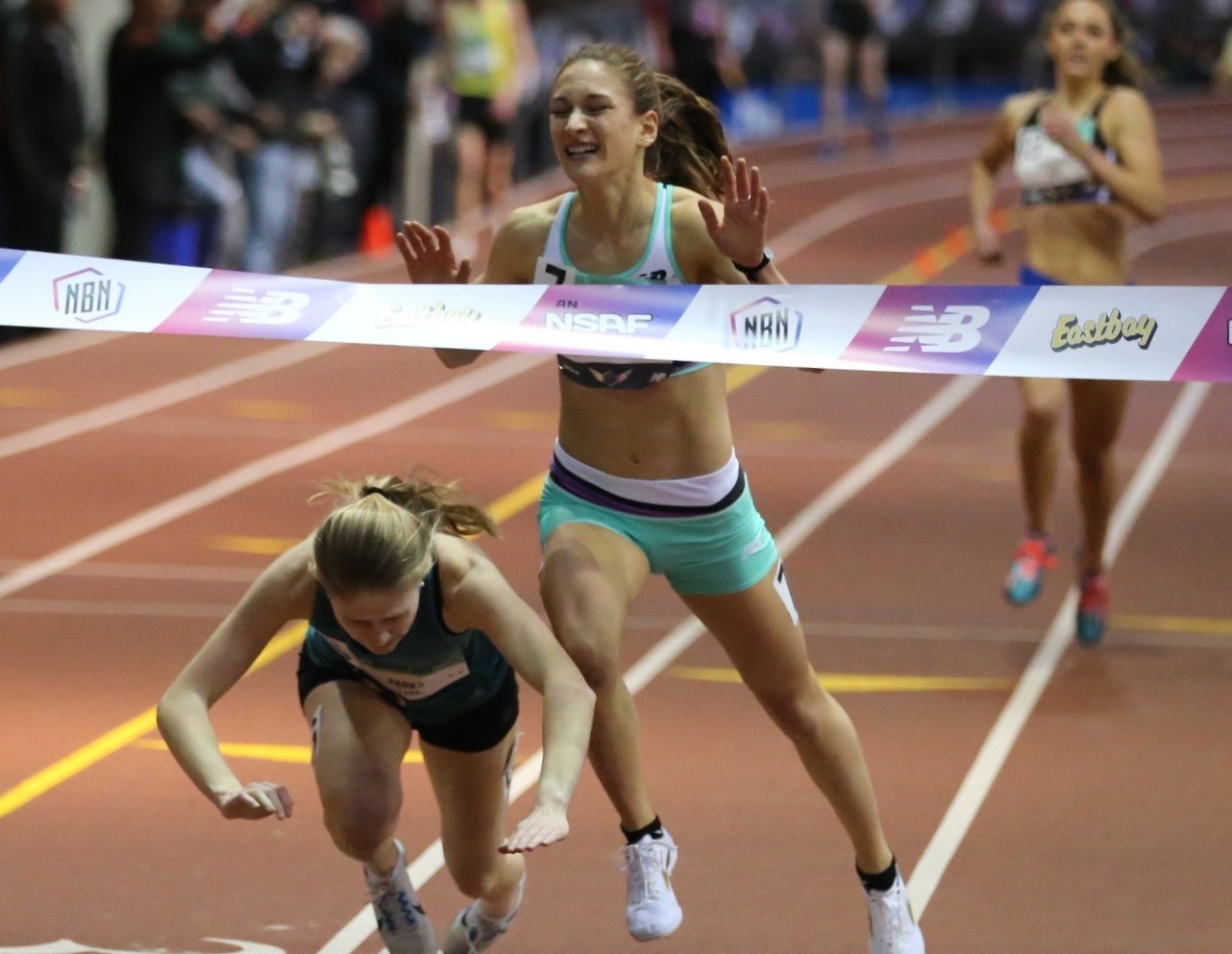 stunning upsets and stirring come-from-behind efforts -- those were in abundance as well. How about freshman Roisin Willis in that girls' 800? Or that girls' mile with Taryn Parks tumbling over the line to prevail over Marlee Starliper by .003 (see photo at right)? And did you see jumper Jasmine Moore and putter Aiden Felty lose leads in their respective events, only to take them right back with clutch, winning efforts?

It was all part of the awesome March 8-10 weekend at the New Balance Track and Field Center at The Armory, where more than 3,700 athletes from 41 states (+DC), 4 Canadian provinces, Guyana and Antigua battled for 46 Championship titles -- plus in many more Emerging Elite, Freshman, Mixed and Junior High events.

The NSAF has been involved in putting on national indoor championships since 1983 and has held its own championship since 1999. This was our 9th indoor nationals with our outstanding partners from New Balance, to whom we are very grateful.

The Jungle, aka Loudoun Valley HS (VA), delivered an unprecedented distance relay triple at NBNI, shattering 2 national records. In Friday's DMR, Sam Affolder's anchor finished off a 9:54.41 -- beating Carlisle's 2017 mark while Affolder was a soph at that school. Then Jacob Hunter finished off a 17:01.81 4x1 mile Saturday noon that shaved .01 off The Jungle's own '18 record. Finally, they completed the triple by defending their 4x8 crown in 7:40.49 (#3 all-time).

NBNI Athletes of the Meet

Jasmine Moore, Roisin Willis, Justin Forde and Micah Williams were named the New Balance Indoor Athletes of the Meet for their individual-event performances on the track and in the field. 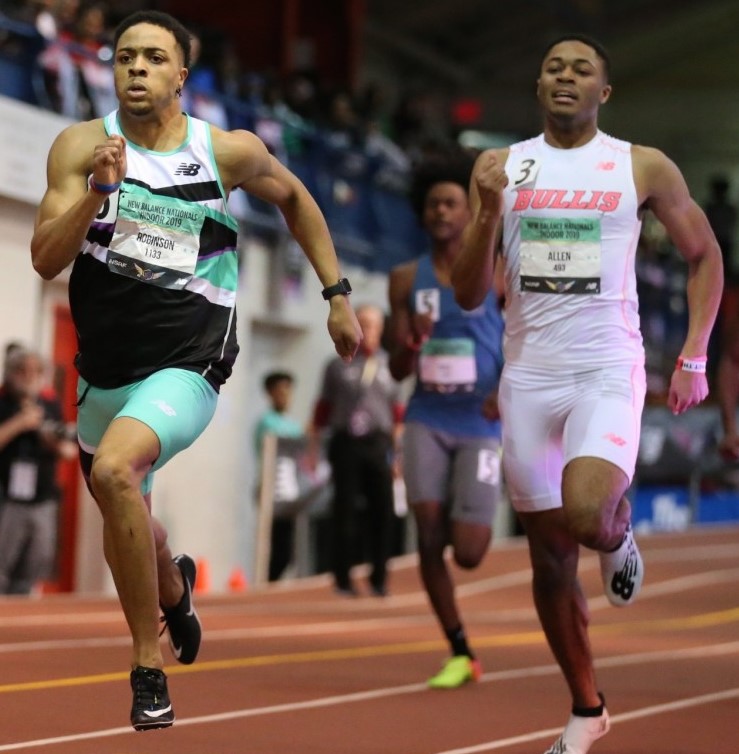 Our many great sponsors, partners and supporters

We thank New Balance for our long-term partnership that has made the 2nd weekend in March the greatest in indoor prep track and field, as well as all they do with The Armory to make it a great environment to keep everyone entertained as well as ready to compete! We hope you enjoyed the apparel, footwear, the music and everything else!

Next College Student Athlete is the NSAF's official recruiting partner. Make sure you verify your FREE recruiting profile during the event and schedule your recruiting assessment with NCSA to boost your exposure and get discovered by college coaches. NCSA will be on site during Packet Pickup Thursday, Friday and from 7 AM-5 PM Saturday. You’ll also have a chance to take your official event headshot at the NCSA booth! Thank you to Gatorade, our Official Sports Fuel Provider for again being part of the action and making sure everyone was hydrated and fueled up!

Thanks also to our exclusive national sports medicine research partner, Sanford Sports Science Institute (SSSI), and Sanford Health – an integrated health system headquartered in the Dakotas. The SSSI conducts research in conjunction with the NSAF to help with the development of future Olympic and World Championship hopefuls.

Those blazing batons you saw were courtesy of our NSAF Official Baton Supplier at RelayBatons.com. We hope all of the Championship relay winners enjoyed them and that many of you other teams had your own personalized relay batons created.

We hope many of you took advantage of the Recovery Zone on the track level at NBNI, sponsored by ROLL Recovery -- stretching and rolling out before, after, or between races and field events. Hope you also checked out the ROLL Recovery products and signed up for their giveaways. And did you try an ElliptiGo while you were on-site during the weekend? It's the world’s first elliptical bicycle -- delivering a fun, comfortable and effective cardiovascular workout experience that inspires people and improves lives -- while eliminating impact on joints. Follow up at their website and Facebook Page.

Hope you also checked out the JAWKU Speed booth. One of our newest partners, JAWKU Speed is about performance - measure speed, agility, and reaction time. Getting fast is a mental and physical commitment, make every effort count. Visualize your performance over time on the app and get the accuracy of multi-thousand dollar timing systems condensed into technology that you wear on your wrist.

Did you score your free sample of ENERGICE? It's designed to give you a competitive edge by boosting hydration, energy and recovery through vitamins and potassium. It's a no-caffiene, no-stimulants and gluten-free solution to Cool Energy on the Go! Our NBNI competition bibs were provided by Athlete Race Numbers, the Official Bib Printer of the NSAF -- and creator of our fabulous new record banners.  Meet Directors, be sure to check out Athlete Race Numbers for your own meets and use the handy NSAF16 code to receive a discount.

Recent News for the 2020 Season

The idea is that, eventually, an Emerging Elite athlete will join the elite ranks, but has not yet attained that status. We have had this division in place for several years now in the outdoor version of this meet. A prime example is that of Kyle Merber. He won the Emerging Elite mile as a junior in 2007 in 4:15.95 (The championship mile was won in 4:03.33). The next year he was New York State 1600m Champion. And in his Sophomore year at Columbia U, he ran 3:58.62 for a mile! Similarly, Megan Goethals was the Emerging Elite mile champion in 2008 in 4:59.26. In 2009, she became the Foot Locker National Champion in cross-country.