There's a good chance Maria Deaviz wasn't on your radar for the national girls shot put title entering the 2019-20 indoor season. That's fine by her. The senior from Souderton Area PA has been busy grinding away, perfecting her spin and getting stronger. This winter, Deaviz, a former basketball and soccer star, has emerged as not only the best in the shot putter in the hotbed state of Pennsylvania, but the entire country.

After finishing 13th last year at New Balance Nationals Indoor in the shot (39-11.25), Deaviz's hard work has pushed her performance forward. She's consistently thrown in the upper 40-foot range this season and on Feb. 7 at the Delaware Valley Girls Track Coaches Association Meet at Lehigh, she broke the 50-foot barrier, throwing 51-10.75 for US#1. Her throw also ranks 16th all-time. Since then, there's been no letdown for Deaviz. On Feb. 16 at the Philadelphia Public League Invitational she won with a mark of 50-6.25. Most recently, on Feb. 21, she won the 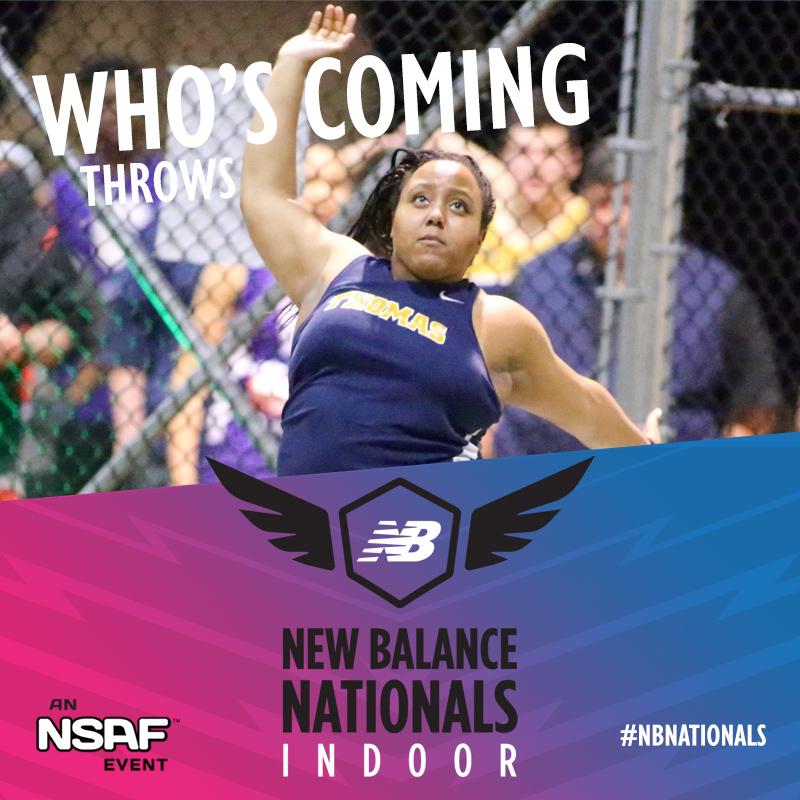 DVGTCA Meet of Champions at Lehigh with a throw of 48-11.50. This Sunday, she'll look to win her first state title at the Pennsylvania PTFCA Indoor State Championships.

"I don't train for one title, I train to get them all," Deaviz said. "A national title would be awesome. I'm happy with the way I'm working right now, and I know I can work even harder."

The pursuit of Shelby Ashe’s all-time weight throw record has been in Monique Hardy’s cross-hairs for more than a year. The reigning New Balance Nationals Indoor weight throw champion and LSU signee has is now less than 15 inches away from becoming the all-time prep leader in the event. On Feb. 6 at the NYRR Millrose Games in New York, Hardy rose to No. 2 all-time with her career-best mark of 66-11.25.

Hardy, a senior at Webster Thomas NY, threw 64-7.25 to win the national title in 2019. She had the six farthest throws of the year and was within a foot of Ashe’s all-time junior class record. A big throw at The Armory’s throwing cage in March could bring the big record down.

“The past year has been pretty tough and I’ve been honing in on my technique, and I’m just happy to see it really paying off now,” she said.

With two-time defending champion Trey Knight satisfied to end his prep weight throw career and begin focusing on the outdoor track season in Washington state, the door has opened for a handful of challengers for the 2020 title – including Kyle Moison of Lincoln Senior High in Rhode Island.

Unlike Knight, who picked up the 25-pound weight for just two meets this month, Moison and his East coast rivals have been slinging steadily since December. Moison has thrown the weight in 11 meets, honing his craft and building on consistency in the 75-78 foot range. He threw a personal best 78-8.50 on Feb. 15, up two feet from his previous best of 76-1.50 a week earlier at the Rhode Island state meet.

Moison will have company as he vies to bring home a national title. Junior Logan Coles of Woonsocket RI, Ruben Banks of IMG Academy FL and Tyler Arbaugh from Van Buren OH, Jayden White from Everett WA and Henry Zimmerman from New Albany OH are among the leading contenders to find their way to the top of the podium.


Jeff Kline – Tops In The Field

The boys shot put final is a contest that feels wide open three weeks out from New Balance Nationals Indoor. Jeff Kline, a senior from Fleetwood Area PA, placed 20th at nationals a year ago but has been making steady progress ever since. He entered the indoor season with a new personal best of 58-6.50 on Dec. 6 and has achieved new PRs throughout the season.

Kline edged up to 60 feet and then smashed the barrier with five throws well past the mark at the Kevin Dare Invitational, where he ended up with 62-10 for a big personal best. His 62-11.50 at the Golden Wolves Challenge on Feb. 9 was his latest improvement and is the top mark on this year’s NBNI entry list. He’ll have a chance to go even farther at the upcoming Pennsylvania state meet.

Kline leads a pack of national title contenders that also includes Josiah Harry from Mobile Christian AL (62-6.50) and Joshua Bradford from Falmouth ME (61-2.25).

Update: Kline improved his shot put PR by nearly two feet in capturing his state meet title on March 1, throwing 64-7.5. He now has more than two feet on the next best entrant.


Ruben Banks – Learning From The Best

Ruben Banks has already moved outdoors and competed in two meets in the shot put and discus. But the hammer and weight throw is where Banks shines. He threw 76-8.50 with the weight Jan. 12 and has already thrown 202 feet in the hammer outdoors. Banks finished ninth at New Balance Nationals Indoor in 2019 and is looking to take a big step up. And without Trey Knight in the competition, Banks is one of the leading contenders to come up big and take the victory.

Last June in Greensboro, N.C., this unheralded junior from Wilson Central TN cranked out a lifetime best 49-foot, 1.5-inch throw to win the girls shot put at New Balance Nationals Outdoor. It was a personal best by three feet. In a matter of seconds, her profile was elevated to the upper reaches of her event.

Finding that big distance again this winter has been elusive, but with Zoe Vlk you know that it’s a possibility. She captured the Tennessee state indoor crown last weekend with 43-6.75 – a mark that may seem modest – but it’s a season’s best and she seems to be steadily progressing toward something bigger. Vlk comes into nationals ranked even higher in the weight throw, where she has thrown 55-6.50 this season.