February 3, 2021 – One of the great missions of the National Scholastic Athletics Foundation (NSAF) is to provide the best opportunities for student-athletes to perform at championship-level track & field events – and in the safest manner possible.

Guided by that mission, the NSAF announces the first-ever NSAF USA Meet of Champions at Myrtle Beach, SC, set for March 25-28 at the Doug Shaw Memorial Stadium in Myrtle Beach, while also cancelling the NSAF Indoor Nationals – which had been scheduled for March 11-14 with our new partners at NYC Parks’ Ocean Breeze Athletic Complex on Staten Island, N.Y.

After great deliberation, the NSAF Board of Directors and Staff determined that a national indoor championship that would include more than 3,000 athletes from all over the country (plus coaches, families and officials) could not yet be held safely at this time. As the possibility the NSAF Indoor Nationals would need to be cancelled grew, alternative plans were made with City of Myrtle Beach officials to host a large-scale 4-day meet with a similar structure to the NSAF’s nationals. 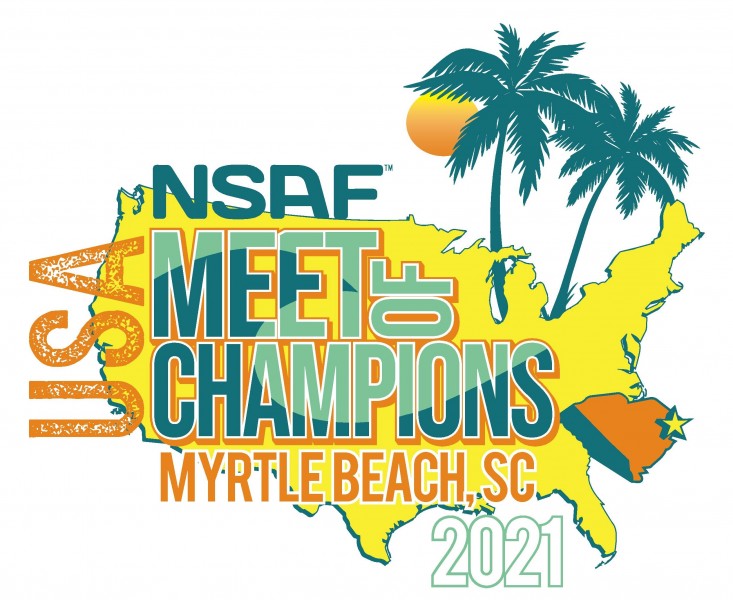 “The goal of our championship events is always to provide the best experience for the full spectrum of athletes, coaches, officials and families, as we've done for more than 30 years,” said NSAF Meet Director Kristi Rieger. “And our first priority is the health and safety of everyone involved. We've determined that we can't yet conduct the Indoor Nationals at the level we and the athletes, coaches, and parents from around the nation expect of the NSAF.

“We have determined that we can, however, still provide a fantastic opportunity to student-athletes around the country with our new event in Myrtle Beach,” Ms. Rieger continued. “This is a 15-acre complex with a separate football field-sized warmup area, plus throwing areas outside the stadium. We will have testing protocols that will be stricter than any other meet we know of in the country for the safety of all, plus a well-spaced meet schedule over four days.”

More details about the NSAF USA Meet of Champions at Myrtle Beach, SC will be announced in the coming days.

Meanwhile, the NSAF Indoor Nationals was to have been the first nationals with the NSAF's new partners from NYC Parks’ Ocean Breeze. Led by Park Administrator Lauren Primerano and Director of Special Events Louis Vazquez, the beautiful 135,000 square-foot, $93 million facility on Staten Island, N.Y. has become one of the premier centers for track & field at all levels since it opened in 2015.

“Though disappointed, we support the National Scholastic Athletics Foundation’s decision to cancel this year’s Indoor High School National Championships. Safety is our top priority and we’re committed to maintaining a safe space for all athletes, officials, and staff,” said NYC Parks’ Ocean Breeze Park Administrator Lauren Primerano. “We’re thankful for our continued partnership with NSAF and look forward to welcoming athletes back to Ocean Breeze for the 2022 National Championships.”

NYC Parks’ Ocean Breeze – the first facility to be World Athletics-certified in the U.S. -- has hosted the 2019 Toyota USATF Championships, four years of the Hershey and USATF National Youth Championships, the New Jersey and New York state championships and several of the nation's largest and most prestigious invitationals, among others.

The NSAF has been involved with high school indoor national championships since the first Pathmark National Scholastic Classic in 1984 and has owned and operated its own indoor nationals since 1999, with sponsors that have included Nike and New Balance. The NSAF’s meet has also been located in Columbus, Ohio; Landover, Md.; Boston; and, from 2010-19, the NYC Armory. The 2020 meet was cancelled due to the onset of the pandemic.
###

REGISTRATION and MEET INFORMATION QUESTIONS: Please direct all questions about registration, entry guidelines, schedule and other meet information to info@nationalscholastic.org.

About the National Scholastic Athletics Foundation, Inc.:
The National Scholastic Athletics Foundation (NSAF) was founded in 1990. It is a non-profit, tax-exempt 501(c)(3) organization with the mission of opening doors to the world for our youth, through athletics, and providing them opportunities to succeed. That includes supporting high school and junior-aged track and field athletes in the US through national high school competitions, including the NSAF Indoor and Outdoor Nationals; The Great American XC Festival and HBCU Challenge; and the American Javfest and Ironwood Throws Classic. It also includes Team NSAF international competition and team-building events in Cuba and Iceland; clinics and event-specific special projects, such as Project Javelin Gold and Project Triple Jump; vigorous grant programs, which enable high school athletes to compete around the country, at USATF Junior Nationals, and internationally; and with program development grants, which are awarded in the winter and fall each year. The NSAF provides approximately $250,000 in grants annually.  For more information about the NSAF, please visit NationalScholastic.org.

About Ocean Breeze:
NYC Parks’ Ocean Breeze Athletic Complex is a 135,000 square-foot, state-of-the-art indoor track and field facility in Staten Island. The first indoor facility in the United States to be recognized as a certified International Association of Athletics Federations facility, Ocean Breeze has hosted 18 major championships, including five National Championships since opening in 2015. The complex also serves as a community resource, offering recreational and athletic amenities to Staten Islanders.