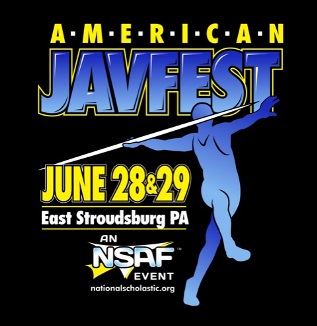 The 5th American JavFest is set to go, Friday and Saturday, June 28-29. Nearly 130 athletes are registered and those still wanting to compete can register at the meet, which starts at noon today (10:30 registration) and 3:45 tomorrow -- with an 11am clinic and registration starting at 10am.

Meanwhile, here are some of the top entries to look for in the elite fields.

The American JavFest Men's Elite field is close to a preview of next month's USATF championship (and possibly next summer's Olympic Trials), with five of the top 10 on the current U.S. list entered -- plus Capers Williamson, who threw 259-5 last year. The top dozen entries have all thrown further than 230 feet in the past few years, topped by Michael Shuey at 263-3. The current U.S. leader, he was 3rd in '17 after his senior year at Penn State when the meet record of 272-8 was set by Cyrus Hostetler.

The Women's Elite field is highlighted by 2017 champ and meet record-holder Ariana Ince, who memorably threw a then-PR 201-4 here two years ago and eventually made entry into the IAAF World Champs that year. She has recently surpassed that PR by an inch, so comes in here a strong favorite to win her third title.

Three others who have surpassed 170 feet will be here to challenge her: Ashley Pryke (188-10), Bethany Drake (179-6) and Dominique Ouellette (175-4). Pryke is a Canadian standout who was a senior at Memphis U. this spring. She was the 3-time American Conference champ and placed 3rd and 7th in the 2017 and 2018 NCAA meets, respectively.

Drake is a Western Washington grad now competing with Oiselle, she has thrown 171-1 this year and her PR is from '18. Ouellette is a Vermont grad who threw 164 in college and has been in the 170s the previous few years.

The throwers of the NSAF's Project Javelin Gold -- including 3 of the top 4 prep boys in the country -- are off training in Germany. But the HS Boys Elite field at the American JavFest is still loaded with a pair of 200-footers and nine total athletes who've thrown 190 feet or better. That is to say, it's deep!

Naturally, 6 of the top 7 entries are from the home state of Pennsylvania -- and those 6 were all among the top 11 throwers in PA this spring. The list is topped by PA state leader Chris Fredericks -- who reached 206-3 this year and was 3rd at AA state -- and Collin Burkhart, who hit 203-8 and then was 2nd at AAA state.

Also on that list is Matt Prebola, seeded third and the #1 freshman in the nation. Prebola was 3rd at AAA state at 199-1 -- among the best 9th-graders in U.S. history. Meanwhile, Burkhart is the #2 sophomore in the nation -- trailing only Penn Relays champ Ian Hall.

The HS Elite Girls field is headed by Alexandria Webb of Ontario, with a PR of 153-1. She's followed by Maryann Ackerman, who is a Slippery Rock HS soph and #3 in PA this year. She was runner-up in the AA state champs.

Taylor Ciccolini, another soph from Mifflin County PA, was ranked 5th in PA with a 146-1 PR and was 3rd in the AAA state meet. Her senior sister Skylar, #1 in the nation and #2 all-time -- coming off a NBNO title and runner-up at USATF U20s -- is training in Germany this week with the NSAF Project Javelin.