Everything about the 2017 Great American Cross Country Festival this past Saturday – the second with Nike now as our main partner and presenting sponsor – was bigger and better than ever: Great individual and team performances by national-class harriers from 15 states, lots of fun and festivities, and the presence of two very special Nike guests to boot.

On the course, the Nike Boys’ Race of Champions saw nationally top-ranked Loudoun Valley HS (VA) live up to its billing with the #2 average in meet/course history and a 62-point tally, topping regional rivals Green Hope NC (87 pts.) and St. Xavier KY (128). Individually, Dalton Hengst (McDonogh, MD senior) ran a strong 14:57.1 to outkick Michael Phillips and Jacob McLeod, with six going under 15:10 and 40 at 16:00 or better.

Meanwhile, the Nike Girls’ Race of Champions was dominated individually by Kelsey Chmiel (Saratoga Springs, NY junior), who scared the meet record with a 16:50 triumph – trailing only Aisling Cuffe in the GAXC record book and ranking #4 among all WakeMed performances. Team-wise, Blacksburg HS (VA) won its 3rd straight title with 115 points, ahead of Lawton Chiles FL at 143 and duPont Manual KY at 165.

When the 2,500+ athletes weren’t running in the ROC or the other 10 prep varsity or JV races during the day, they had the outstanding opportunity to meet and get autographs from World Championship 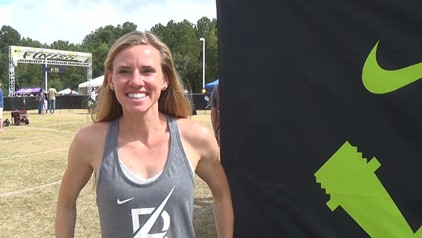 steeplechase silver medalist Courtney Frerichs and sub-4 miler Craig Engels. There were long lines all day long to meet the young distance stars, who reveled in interacting with their fans and remembered they were in their shoes not so long ago.

“It’s been absolutely surreal, that’s the exact word that I use,” said Frerichs of the attention she’s gotten since London and the love from the fans like she experienced Saturday. “It’s been absolutely a dream come true, especially being next to Emma (Coburn, London gold and Olympic bronze medalist). Emma’s the one I was looking up to several years ago when I started steeplechasing. She’s just been a phenomenal role model and has really paved the way, especially in last year in Rio, to show us medaling is possible.”  |  Full Interview

Dalton Hengst came into GAXC with plenty of credentials to back up his status as favorite: Two fast XC victories (including Paul Short title in 14:57), a Penn Relays title and 4:08 mile last spring, national championship creds across the board. Still, the field would be deep and tough, and the McDonogh HS (MD) senior hadn’t won an XC race of this magnitude before.

Yet, less than 15 minutes after the gun was fired, there was Hengst sprinting down the straight and emphatically leaping through the finish tape with a loud, guttural “YEAH!” for all to hear. It was the same kick which had served him well in at CSI in Cuba last May, when he repped Team NSAF with a 1,500m victory, as well as other victories. The display at the tape came despite the fact that Michael Phillips (Chiles, FL sr) and Jacob McLeod (Trinity Christian, GA sr) finished hot on his tail at 14:58.2 and 14:59.0, respectively.

“It was important,” said Hengst of the accomplishment and his reaction. “Any time you can come out and beat a great field of guys … a lot of those guys in the MileSplit rankings and DyeStat rankings … it was good just to win. I was pretty happy!

“I didn’t really have too much doubt – until 800 meters were left and I saw how many guys were still left in it,” he added. “It was a tough last hill and I hurt pretty bad the last 100 meters, but I was happy to pull it out.”

Ever since the pre-season, Loudoun Valley HS (VA) has been touted as the #1 boys’ XC team in the country. Saturday was their biggest test to state and suffice it to say, they clearly validated their status – even 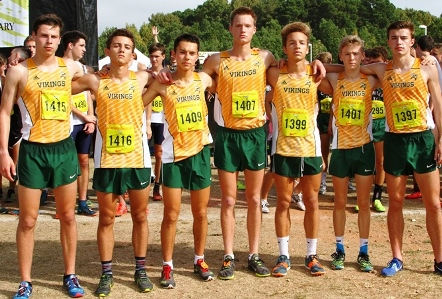 if they were short of being completely satisfied with the performance.

“We did well, but we definitely all have stuff to work on to make sure we run even better in the post-season and at states,” said Morris.

Green Hope’s 87-point performance in 2nd was a strong one and indicative of their potential to finish in the top two again on this course come NXN Southeast in November. Their boys’ team has never advanced to Portland, but has six seniors with that goal firmly in mind: Peyton Barish, Ian Delgado, Finn McBride, Ares Epps, Ryan Kemper and Daniel Vo.  Barish led Saturday’s effort in 9th at 15:18.5, with Delgado and McBride coming in together at 29th and 30th (15:51.5, 15:51.6).

Kingwood HS (TX), the Hurricane Harvey-displaced school that was a special guest of the NSAF, was 8th with 281 points in the 23-team field. They were led by Nick Majerus, the top sophomore in the meet with 15:38.4 in 17th.

Once the gun went off, there was never any doubt who would win this race and whether there would be an assault on the meet record. There were only questions whether the meet (16:40.9, Aisling Cuffe, 2010) 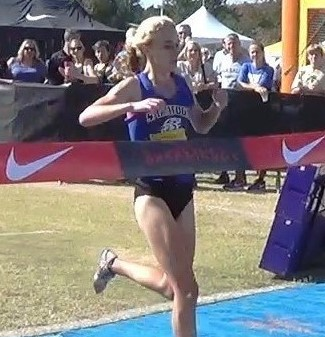 Kelsey Chmiel was, indeed, all in. The Saratoga Springs NY junior went after it from the start, but perhaps just a bit too aggressively, especially in the warm, dusty conditions. She had a reported split of 4:57 on the downhill first mile and by the final stretch she was still strong, but there was no real kick. Chmiel crossed the line in 16:50.3, winning by 36 seconds and becoming #2 in meet history and trailing only Mareno, Cuffe and Ryen Frazier on the all-time WakeMed list.

9-time ROC champ Saratoga Springs HS (NY) was the highest ranked team and favored by most coming into this weekend, but 2-time defending champ Blacksburg HS (VA) was not going to be denied.

Led by Wolfe’s outstanding performance (see above) and by putting their first five in the top 50 (and among the top 40 scorers), the Bruins tallied

115 points. The 2016 champs (and NXN SE winners) had graduated their #1 Samantha Marin and a few others, but the combination of rising stars and returning veterans has them again establishing themselves as a prime contender to make it back to Portland.

“We knew it would be a little bit of a recovery,” said Edwards, regarding the reloading process. “But we’ve had a lot of girls step up and take the spots that were left after graduation, like Kaitlynn moved up a lot and we had Eliza (Stowe) and Julia (Lattimer) come up and take spots on varsity, and they’ve been doing so well.”

Led by Wallace’s breakthrough performance (see above), and four other solid scorers, Lawton Chiles HS (FL) was a surprising 2nd at 143 points. Then first-time GAXC attendee duPont Manual HS (KY) used the 1-2 punch of Kathleen Simms (9th, 18:06.4) and Alena Sapienza-Wright (14th, 18:18.7) to power a 3rd-place finish with 165 points. Rounding out the top five were South Forsyth HS (GA) at 204 and James Madison HS (VA) at 207. Saratoga Springs had to settle for 8th with 280 pts, with Coach Linda Kranick noting some of their scorers had missed the trip due to the school’s homecoming.

The Mustangs of Kingwood HS in Texas, special guests of the NSAF (as mentioned above) were 13th in the girls’ field, led by the 33rd-place finish of sophomore Rachel James (19:04.0).