This is the first in a five-part series, a joint effort with the NSAF and Runnerspace.com, highlighting some of the exciting confirmed entries for the 2017 New Balance Nationals Outdoor in each event category!  Coming in the days ahead: Part 2: Jumps  |  Part 3: Sprints/Hurdles  |  Part 4: Distances  |  Part 5: Relays |  FULL ENTRIES (June 7 update) 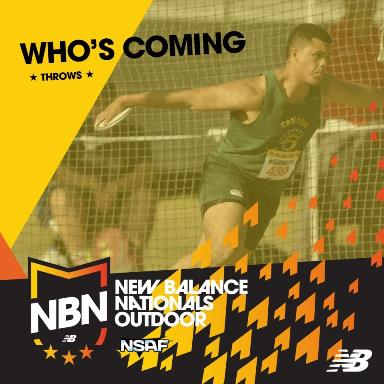 It’s one thing for a discus thrower to hit a big mark; it’s another to establish high-level consistency – in an event where prevailing winds can be such a big factor. In 2017, Turner Washington (Canyon del Oro, AZ senior) has done both. The former was, in this case, achieved after the latter. Starting with a 211-1 at the Willie Williams Invite on March 17-18, Washington threw between 211 and 218 feet in seven consecutive meets, going unbeaten and improving his PR three more times. Then, throwing against pros at the Tucson Elite Classic three weeks ago, he landed a monster 227-10 – getting that (really) big mark. He’s now #4 all-time behind national record-setters Nik Arrhenius, Mason Finley and Ryan Crouser.

The Arizona signee then shifted gears last weekend at the Iron Wood Throws Classic, taking on the 1.75kg junior weight implement – which is used at meets like USA Junior Nationals and the Pan American Junior Champs later this summer – and immediately became consistent there, too. He reached 202-0, 206-7 and then 212-0 to become #2 all-time behind Finley’s 214-4 from 2009. Washington, whose father Anthony was the IAAF World Champ with the disc back in 1999, came into ’17 off a junior campaign where he reached 202-0, won #CSICuba16 with Team NSAF, then took 2nd at NBNO. Greensboro will be his final chance to move up the prep all-time list.

Skylar Ciccolini – What a difference a year makes

Skylar Ciccolini came to the NSAF’s Project Javelin Gold last fall after reaching 134-11 for the event as a freshman. That’s a solid mark for a 9th-grader and there was clearly potential there for some gradual improvement, with progress in technique and strength taking hold over time. It’s fair to say that a 10- to 15-foot jump in 2017 would have been something to be pleased with. But a 30-foot improvement? WOW, only the most prescient visionary could have foreseen that, but when Ciccolini sent a 164-9 rocket into the sky at Iron Wood Throws Classic last weekend, she became the new U.S. leader and blew away reasonable expectations.

The Mifflin County HS, PA 10th-grader’s season looked promising from the start, as she hit 140-7 in March for her first PR. Then she really began to open eyes as she reached well into the 150s in a mid-week dual, then confirmed with a 153-1 at Penn for 4th against a fine field. Ciccolini started becoming more consistent over 150, then capped off her state season by winning the District 6 AAA title and taking 2nd at AAA state with 155-7. The winner there (and at Penn) was national record-holder Madison Wiltrout, who has also thrown over 173 in a dual this year. Ciccolini will have a chance to prove she’s truly #1 in Greensboro when they meet again.

It would be understandable if Ty Hampton had come into his first season with the NSAF’s Project Javelin Gold last fall with a significant bit of frustration hanging over him. 2016 had started so promising in his favorite event, as he landed a 173-2 in early April as one of the top freshmen in the country. But nagging injuries plagued him and he eventually was unable to qualify for state. There was some redemption in summer track, but Hampton went into fall and winter training determined to stay healthy and see where the new training and his talent could take him. Several healthy months later, the answer to that question seems to be “really far!”
At the start of April, Hampton reached 193-8, then began to establish consistency there all the while being unbeatable in Oregon. He improved to 195-4 about a month later, then went into his 4A state meet ready for another breakthrough. It came in the first two throws, as he nailed 201, then 208-9 – winning not only the 4A title but having the furthest all-class throw for the season in Oregon. At Iron Wood last weekend, he came close to that, with a 203-2, and will come into Greensboro seeded behind only a trio of older throwers – two of them being Project teammates Liam Christensen and Gavin Darcy. A once unclear future has become a spectacular present for the North Bend sophomore.

Some observers of the national prep girls’ throws scene that notice Molly Leppelmeier on the shot put, discus and hammer lists, might be tempted to think, “Hasn’t that girl been throwing in high school forever?” The answer, of course, is no – but a Leppelmeier has been winning titles in Ohio for about a decade. That’s because Molly, currently a Macomb HS senior, was preceded in throwing excellence by her sisters Jackie (Class of 2011) and Becky (Class of 2013).  And when you’re a Leppelmeier, breaking a family throws record might be harder than becoming a New Balance All-American. By surpassing her older sisters this year as a senior, Molly is a threat to climb the podium in Greensboro next week not one, not two, but three times.

The youngest Leppelmeier was already pretty good before this year, having putted 46-7.5, hit 148-11 in the discus and 170-1 in the hammer. But now she’s improved those marks to 49-8, 171-5 – huge jump in the discus – and 177-6, respectively. That’s US#3, #5 and #5, respectively. Only shot put national record-holder Alyssa Wilson can claim that kind of shot/discus/hammer excellence. Beating Jackie’s D3 state record 49-3 from ’11 last weekend with her 49-6 might have been her most satisfying performance. Molly finished 6th or 7th in each throw at NBNO last year; this year, top 3 in each is achievable.

A few years ago, shot put national record-setter Raven Saunders was the shining example of how quickly your life as a thrower can change if you switch to and master the spin technique. She went from being a 42-footer to a 56-footer in a matter of months. The transformation for John Meyer, Jr. – now a junior at Lockport HS, IL – wasn’t quite as dramatic, but career-changing nonetheless.  When Meyer was a sophomore early last spring, he was a 55-foot putter with the glide. According to a Chicago Tribune story, he and his coach were going to try and learn the spin later that summer, but they spontaneously went for it during a random practice session.

The improvement was almost immediate. By mid-April, Meyer’s PR was 63-0 and he went on to win the 3A title. So far in ’17, he’s continued to improve steadily, hitting 64 indoors, then 65, 66 and finally 67-2 at his sectional meet last month. He then defended his 3A crown at 65-10.5 and added the discus title at 189-5. Now, when Meyer hits the ring in Greensboro for his first national meet (in or out), he’ll be the decided underdog. Defending champ Adrian Piperi (if recovered from injury) and 2-time NBNI champ Jordan Geist – both seniors – are expected to wage battle with throws around the 75-foot mark. But an All-American spot and status as the guy to beat in ’18 are there for the taking.

Three-event throwers are nothing new down around Throw 1 Deep country in Marietta, Georgia. Coach Mike Judge has taken many a putter and discus thrower and taught them the hammer and weight throws – often with spectacular results. Some of his athletes wind up establishing All-American levels of talent in two or more of those events, and that’s where Makenli Forrest – in her second year at T1D – comes in. As a sophomore at Woodward Academy in College Park, GA in 2015, she was a 39-foot putter and threw 107 feet in the discus. The next spring, Forrest would progress to 45-8 SP and a huge 153-4 in the DT – while hitting a shocking 176-8 in her new discipline.

The consistency wasn’t there last year, but Forrest has improved that in 2016-17.  She’s been unbeaten in the discus and nearly so in the shot, winning both Georgia Meet of Champions titles. A new high was reached last weekend with the platter at the Iron Wood Throws Classic, as she hit a PR 169-8 in the discus and a seasonal best 169-10 in the hammer. She threw 46-9 in the shot earlier this year. Indoors, she was 4th in the NBNI weight throw and 6th in the shot put. Like Leppelmeier, she has a good chance to get high on the podium in all three throws in Greensboro.

Only one non-senior is in the boys’ hammer national top 10 rankings going into NBNO, and that’s a super sophomore from Classical HS in Rhode Island, which has an excellent tradition in the event – who is all the way up in the #3 spot. Jacob Furland trails only senior twin brothers Michael and Steven Feldman from New York on the list, having thrown a 219-10. He started his 9th-grade year in promising fashion, winning the RI state frosh title in the weight with 46-8.5. He started the hammer in the spring in the mid-130s, but progressed all the way to 173-3 by the state meet by season’s end, taking 10th against the elite upperclassmen.

This past winter, Furland made solid improvements with the weight, getting up to 61-5, placing 2nd in the USATF Hershey meet – but he still had quite a ways to go for All-American status. Then came this spring. Furland had a good start in April, hitting 191-2 at the K of C meet, then 203-0 in New York. Already he had improved 30 feet from ’16. But then he reached 207-8 in his Central division meet and the eye-popping 219-10 in his Class B state meet 11 days later for an unexpected state title. Only four sophomores in U.S. history – eventual national record-setters Walter Henning, Conor McCullough, Rudy Winkler and Bobby Colantonio – have ever thrown further.

Carisma Holland – Yes, she has it …

Charisma, right? You wanted to know if Carisma Holland, well, lived up to her name, so to speak? The answer, happily, is yes. The positive energy radiated off this Seneca HS, SC senior when she spoke after winning the Bojangles Classic shot put title earlier this spring, especially when she talked about that 49-2.75 a few weeks earlier – still her PR and standing up at US#8. Holland was undefeated in S.C. this spring, winning her third AAA state title to go with three in the discus (148-7 PR from ’16). Her sister Majayla, a ’14 Seneca grad, was an outstanding thrower as well, winning four state titles before moving on to Clemson.

Holland, who is a U. of South Carolina signee, has also built up a solid resume in NBN meets to date. She was 8th in the outdoor shot last year and 9th in the discus. Then this past winter, she was 5th in the NBNI shot put with her indoor PR of 46-10.75.  She has another great opportunity to climb the award stand at NBNO.