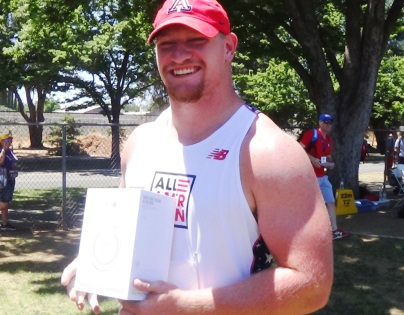 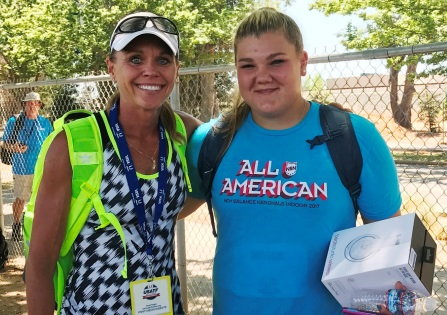 We were pleased to announce at the end of Sunday's competition at New Balance Nationals Outdoor that our 2017 NBNO Athletes of the Meet were Jordan Geist and Alyssa Wilson. As both athletes had departed after their events, we presented them with their awards the following weekend at the USATF Outdoor Championships and Junior Championships in Sacaramento. 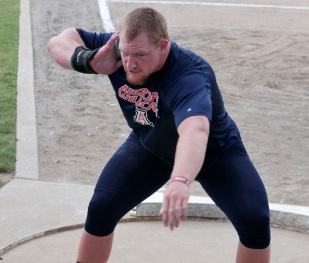 Jordan, already a 2-time NBNI shot put champ and with 7 career All-American performances to his name coming into the weekend, rocked the house Saturday afternoon with a meet-record 76-0 shot put -- an outdoor PR that moved him up to #3 all-time outdoors. As impressive as that was, his hammer throw victory shortly thereafter might have been even more astonishing: Coming in with a PR of just over 200 feet and no competitions in two years, he whirled a 238-9 that rocketed him up to the top of the national list. Finally, in Sunday's discus, he finished a very respectable 2nd to national leader Turner Washington with 201-9.

So Jordan finishes with 4 NBN titles and 10 All-American finishes in the throws for his career at Knoch HS, PA. He set three meet records, the new outdoor shot mark adding to the two he set indoors. He even competed twice in our Chicagoland and Iron Wood Classic throws events. Jordan followed last weeke in Sacramento by winning the Junior shot to make the Pan Am Junior team and competing in the senior (16-lb.) shot vs. the elite men. Given his all-time status in the shot (#2 indoors, #3 outdoors), hammer (#13 all-time) and discus (208-7 PR), the Arizona signee surely lays claim to being one of the greatest prep all-around throwers ever (if not THE greatest). 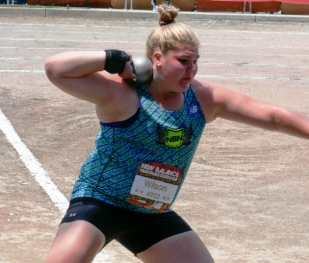 Alyssa is also best known for her shot-putting, having already crushed both the indoor (57-5.5) and outdoor (57-1.25) national records. Like Jordan, she had already won two NBN titles, but in her case it was this year's indoor meet and last year outdoors. Alyssa didn't PR at NBNO this time, but still had an overwhelmingly dominant win, hitting 54-10.75. Perhaps that underscores the most amazing thing about the Donovan Catholic, NJ senior and UCLA signee: There are five other 54-foot-plus putters in prep history, with a combined 18 meets over that barrier. Alyssa has nearly twice that many (35) alone!

But she has established herself as arguably the best all-around thrower in prep history as well. New proof of that came in Saturday's discus, when she won with a 179-7 -- beating a 20-year-old meet record and winning by more than 18 feet. She is already #11 all-time with her 182-0 PR. Then she finished 2nd in the hammer at 180-0 -- an event where she has thrown over 190 feet and is also just outside the top 10 all-time. Alyssa, who also competed with Team NSAF in the 2015 Chicagoland Throws, finished her NBN career with four titles and 11 All-American finishes. She is also the 2016 World U20 shot put bronze medalist and last weekend made Team USA for Pan Am Juniors in the hammer (1st) and shot (2nd).