This is the second in a five-part series, a joint effort with the NSAF and Runnerspace.com, highlighting some of the exciting confirmed entries for the 2017 New Balance Nationals Outdoor in each event category! Previously: Part 1: Throws. Coming in the days ahead: Part 3: Sprints/Hurdles  |  Part 4: Distances  |  Part 5: Relays |  FULL ENTRIES |  FULL START LISTS 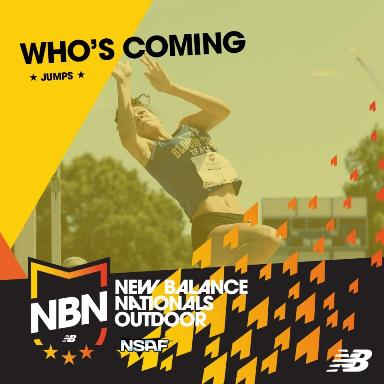 Establishing consistency over six feet is something few female prep high jumpers have mastered (outside of Vashti Cunningham). Some seasons there’s not a single girl who achieves that. So in that light, Jelena Rowe is indeed a rare talent and performer. Coming into her senior season at Bloom Twp. HS, IL with a 5-10 PR – achieved while winning NBNO last spring – she immediately reached the same height in her Illinois indoor season opener … and went from there. At the Lady Pirates Invite on March 11, she went over 6-0 for the first time – an indoor US#1 – then duplicated the feat a week later. Finally, at the season-ending Illinois Top Times meet, she soared over 6-1.

Outdoors, it’s been more of the same for Rowe: A 5-10 meet to start the season, then a head-shaking string of FIVE straight meets at 6-0 or better, including matching her indoor PR with a 6-1 at Glenbard West. That culminated in her Class AAA state title in Illinois, following a runner-up finish last year. Add it all up, and that’s EIGHT meets over six feet in 2017 and, maybe more impressively, ZERO meets where Rowe didn’t clear at least 5-10. That consistency will be hard to beat next week at NBNO as she shoots for 6-2 or better.

Darius Henderson – Out of nowhere to lead the LJ

Most elites, however talented they might be, have a progression to the top that can be traced and easily understood by we pundits and fans. Then there are those that embrace track and field late, perhaps from other sports, start working with a good coach and then shock us with dramatic improvements. They suddenly produce performances that make you say, “Where did THAT come from,” and often question the validity of the marks. Such has been the case with Darius “DJ” Henderson, who went from being a very average private school long jumper – at Trinity Christian, a T.A.P.P.S. school in Cedar Hill, TX, near Dallas – to standing #1 in the country.

Trying track as a soph in ’16, he was a 20-5.5 leaper and ran 50.75 for 400. This spring, it was 22.58 for 200, a lot of relay work and a 22-3 PR (in a limited number of meets as he missed time due to off-field issues). So no one – except maybe Henderson himself – expected the 23-11 bomb with which he won the TTFCA Meet of Champions on May 20. Two weeks later at Great Southwest, he was leading at 23-7, and then was passed by two other jumpers. Digging down deep, he hit the board perfectly and landed 25-5 later – and with a legal 1.6 wind behind him. Suddenly DJ Henderson – still a junior – has become the best … and faces a huge task to confirm his talent in Greensboro this coming weekend.

Jasmine Moore – Knowing how to be a champion

From her middle school days, as a growing talent in track and field with hops, speed and rhythm, it was pretty clear that Jasmine Moore was going to do big things in the sport. But one of those things that you often can’t teach – performing and winning under pressure – has come to be known as perhaps the sophomore’s greatest attribute. After sweeping the Texas 5A state horizontal jumps as Mansfield Lake Ridge freshman, she was invited to join the NSAF’s Project Triple Jump and came to NBNO last year as a serious podium contender. But it was a bit of a jaw-dropping surprise when she popped a wind-aided 43-5.75 on her final attempt to take the win. It was the longest jump ever (all-conditions) by a U.S. 9th-grader.

So then if 2017 has been about establishing consistency and backing up that big freshman breakthrough, then Moore has gotten it done. The soph has lost just once vs. U.S. preps in the TJ – to fellow superstar Tara Davis indoors – and she avenged that with her 42-6.75 triumph at NBNI, breaking another class record. Outdoors, she’s kept racking up 42- and 43-footers, improving her wind-legal best to 43-4.75 during another 5A state sweep. She made Team NSAF for #CSICuba17 … and learned some valuable lessons competing against some of the world’s best. At NBNO, Moore will be tested again by fellow 43-footer Tatiana Marsh, and don’t be surprised if she again rises to the PR level and top of the podium.

In the final season of his prep career, Hasani Knight seems to be peaking at the right time. The Landstown HS, VA senior last weekend smashed through a pair of barriers, nailing his first career 24-foot long jump and 50-foot triple jump. Most significantly, said triple jump didn’t just eclipse the 50-foot mark; it went all the way out to 51-3.25 and, with a 1.8 wind, makes him #1 in the country. Knight was unbeaten in the TJ coming into state, with an outdoor best of 49-5.5, but hadn’t really come close to his 50-11 overall PR from last year, when he won AAU JOs. In the LJ, he had a 23-10 from a small weekly conference meet last year, but otherwise had a 23-0 best going into state. He had a 23-2.5 after two fouls, then hit 24-3w (+2.1) on his final attempt.

Knight’s NBN history is somewhat checkered, so he’ll hope to overcome that this time around. At NBNI this past March, he had a 49-10 seasonal best coming in, with three meets over 49, but could manage just 45-10.75 for 13th. Similarly, his junior year he had just won indoor state with a 48-4 and came into to NBNI and could not reach 46. On the other hand, he had a strong NBNO last spring at 48-7.5 – which was his seasonal best until AAU JOs. Taking NBNO next week will not be easy, with NBNI 1-2 finishers Garry Williams and Jalen Seals among eight 49-plus jumpers in the field, but this time Knight may have his peak just right.

Katie Jones’ 2017 NBNI was everything an athlete could ask for. She came in as a clear podium contender, but the underdog for the title – behind defending champ and World Junior finalist Carson Dingler. She had a clean record through a near-PR 13-6.25, then blew away her previous best with a 2nd-attempt 13-9.25 – which Dingler was unable to clear. That capped off an unbeaten indoor season for Jones, who had been runner-up to Dingler at NBNO last summer, and a very impressive progression over four years. In fact, that NBNO is the South Williamsport HS, PA senior’s only defeat since March of ’16.

However, the outdoor campaign hasn’t been all smooth sailing for Jones. She was injured in April and had to miss a Penn Relays title defense bid. Upon returning, she reached 13-0 at her PHAC championship, then an outdoor PR 13-7 at 4AAA district and then settled for 13-4 to win her second straight PIAA state title. So, is it fair to say Jones will come to Greensboro as an underdog again, since Dingler has a 13-10 outdoor best in ’17, plus a 13-11 PR? Call them co-favorites. And, with two others over 13-6 in the field, the girls’ pole vault will have plenty of drama and a chance for Jones to build her legacy.

Since Armand “Mondo” Duplantis has been redefining what is possible in the prep boys pole vault this year, it’s been tougher for a 17-footer to get a lot of respect. Seventeen feet has been considered a pretty high level of achievement in the event, and anything above 17-6 usually meant you were in the conversation for a national title – and the best or within a few inches of the best in the country. Mondo’s ascension to 19 feet at NBNI – and now beyond – kind of changed all that. But it’s entirely possible that Duplantis – not registered for NBNO – may have vaulted his last high school meet, leaving the prep boys’ event back in the state of those climbing toward the 18-foot mark.

And that’s where KC Lightfoot comes in. The Lee’s Summit HS, MO standout – with a cool name(!) – is fresh off a serious 17-8.5 PR at Great Southwest and is now in the position to supplant Duplantis as the nation’s top male competing at the prep level. A year ago, he was a 16-3 soph vaulter coming into NBNO, where he got 4th behind Chris Nilsen in bad wind conditions while Mondo no-heighted. He surpassed 16-10, 17-0 and finally hit 17-4.25 indoors, before settling for 17-1 at NBNI for the runner-up spot. This spring, then, has been about consistency over 17 and finally that breakthrough at GSW. Being just a junior, not only is an NBNO title opportunity at hand, but plenty of time to join the prep 18-foot club and beyond.

Anna Hall – Getting serious about the multis

It’s always a wonderful spectacle when an athlete has their breakout performance at a national championship – where the masses gathered at venues like The Armory or Aggie Stadium in Greensboro literally witness their “a star is born” moment. For Anna Hall, that came during NBNI as she surged to the pentathlon title with 3,740 points. And if you want to narrow it down, you could say it was during those moments in the pentathlon high jump when she cleared 5-8, 5-9.25 and 5-10.5 on successive leaps to snowball the momentum that would carry her to victory. The victory wasn’t clinched until after the 800 – where she ran 2:20.98, another strength for her – but that championship form was already established.

NBNI was far from the first multi for Hall, but it marked by far her biggest success and a new level of commitment to that. In the hept, she was 7th last year at NBNO at 4,517, but made a massive improvement in April at Arcadia, scoring 4,963 for 2nd behind Tierra Crockrell. Also a particularly strong hurdler, and a solid long jumper and sprinter, Hall excelled during the Colorado state season for Valor Christian HS, winning state 100H and 300H titles and taking 2nd in the HJ. Then, repping Team NSAF in Cuba, she overcame a poor high jump to win the hept there with 4,796. Here in Greensboro, she’ll be the clear favorite – with 5,000 points a definite target – and will battle for the HJ title, too.

It doesn’t hurt to have a great name when trying to establish one’s place in the track and field world. Old timers remember, for example, Immaculate Perfection Harris (I-Perfection) – a prep and collegiate standout in T&F and football. While not quite as novel as that, Alexis Bravo immediately catches one’s attention and there’s a good chance that after the NBNO champs, fans will be shouting “Bravo!” for his performance. Bravo hails from San Marcos, CA – but has primarily competed in his native Mexico – and his specialty is the decathlon.

He hasn’t quite caught the attention of the IAAF and Tilastopaja international top-lists yet, but last summer he tallied a mighty 7,033 with the youth implements and stands as the top seed going into this weekend. Bravo’s specialties include the long jump – where he has bounded 23-6.5 – as well as the 100 meters (10.98), 110 hurdles (13.48 over 36” barriers) and high jump (6-4.5). He’s not quite as strong in the throws, pole vault, 400 and 1,500 – but solid enough. He’s now 18 and beyond the youth level into juniors, and hoping to get interest from U.S. colleges and universities. Being a favorite by more than 500 points in Greensboro, he’s likely to get that attention.