This is the third in a five-part series, a joint effort with the NSAF and Runnerspace.com, highlighting some of the exciting confirmed entries for the 2017 New Balance Nationals Outdoor in each event category! Previously: Part 1: Throws  |  Part 2: Jumps. Coming in the days ahead: Part 4: Distances  |  Part 5: Relays |  FULL ENTRIES |  FULL START LISTS 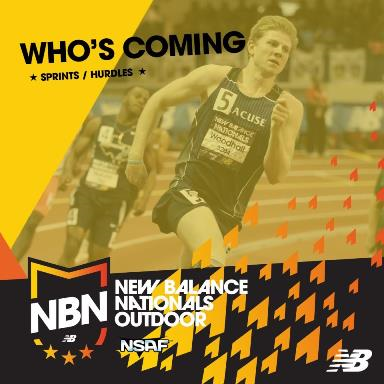 A terrific 2017 season for Florida sprint star Anthony Schwartz was imperiled by an injury suffered at the Florida State Meet. Prior to that early May weekend, he had established himself as the best short sprinter in the country. Coming into this, his junior year for American Heritage HS, Schwartz had PRs of 10.37 and 10.26w – as well as 21.02/20.76w – from his soph season. Then he kept progressing through late March this spring, when he ran a stunning 10.15 at the Florida Relays – with a barely legal 2.0 wind – to not only take the national lead and move to #6 all-time U.S., but also set a World Youth (Under-18) record. He was also down to 20.66 in the 200 and kept running fast, near-PR times in districts and region as the state finals loomed.

But at state, Schwartz aggravated what had been a minor a hamstring injury, and struggled to 8th-place finishes in the 100 and 200 finals. Fortunately, it wasn’t a season-ending injury, but the question was whether he could return for the June post-season showdowns. Well, rest and treatment has proven pretty successful and Schwartz took his spot on the line at the Adidas Boost Boston Games two weeks ago and ran 10.41 for 2nd-place. With another week to both recover and train, he’ll contest both the 100 and 200 in Greensboro – still the man to beat in the century and a sharp contender in the deuce.

Lynna Irby figured out early on that she wanted to a sprinter who competed well for her high school team during the spring and battled for state titles, but who really reached her peak (particularly in the 400) in June and July – giving herself a chance to make U.S. teams and fight for medals. When she was a freshman in ’14, the distinction wasn’t so obvious. But then as a sophomore in ’15, Irby ran “just” 54.37 through state, but then got down to 53.36 for 2nd in the World Youth Trials. A few weeks later in Cali, Columbia, she stunned the world with a 52.77 PR in her semi and a mind-boggling 51.79 PR silver medal performance in the final.

Thomas Burns – Closing in on records

Having a superstar hurdler/football player as an older brother (Artie), as well as being part of one of the greatest prep track and field programs in the country, was certainly a solid blueprint for success for a young Thomas Burns starting his freshman year at Miami Northwestern HS in 2014-15. He had already done well at the JO level, and as a freshman would run outstanding times of 14.30 for 110H and 37.22 for 300H, coming close to a state title. Last year, he got his 300H into the high 36s, but dropped down a spot in the 3A state finals – getting 3rd.

Come 2017, Burns is no longer just a “rising star”; he’s there, starting with a sequence of blazing 300H times in February and March: 36.55 at the Spartan Invite, 36.04 at Sam Burley, 36.12 at Bob Hayes and, finally, 35.81 at the GMAC Champs. He lowered his PR to 35.57 at his Region 4 meet, then – after settling for 35.90 during a windy 3A state meet – pushed that mark down to 35.25 at Great Southwest. That ended his season in that event just .23 short of the national record – but now it’s on to an event he’s never contested. The 400H final at NBNO will be his first and while 50-point or better should be a given with a low-35s guy, It will be fascinating to see how he fares against experienced stars at the distance like Cory Poole.

It’s always exciting when athletes from sprint-rich Texas and Florida join us for the first time at NBNO, having overcome the fact that their state meets have been more than a month earlier (as opposed to many from beyond the South and Southwest). So NBNO welcomes Sha’Carri Richardson, the Dallas Carter HS (TX) junior who has a chance to double the 100 and 200. While the level of competition in her school’s 4A classification isn’t always as stiff as 5A and 6A, she blasted the fastest 100 in Austin last month, hitting a US#2 11.28 that is second only to Symone Mason on the U.S. list. She get to race Mason in the 100 – an event where the Floridian ran 11.24 way back in February, still the U.S. leader.

Meanwhile, Richardson has also hit 23.39 and 23.18w in the 200, where only Mason and McLaughlin have run faster – neither of whom will race the furlong in Greensboro. Karimah Davis (see below) and fellow Texans Kynnedy Flannel and Rosaline Effiong are the other top contenders. Richardson was not an immediate sensation her freshman year at Carter HS, but as a soph last year, she improved quickly down to 11.34 and 23.61, taking 1st and 2nd in 4A, respectively – as well as a 2nd in the GSW 100. This year she bypassed GSW, after taking 2nd in the Prefontaine 200, and will go for the big double here.

As much adversity as he has overcome in becoming an elite athlete and in racing able-bodied rivals as a Paralympian, the truth is that Hunter Woodhall has rarely performed below expectations when it’s come to the results on the oval. With the opportunities he’s created for himself, he has a great record of producing outstanding performances. So when Woodhall contested the NBNI Championship 400 trials this past March in his first trip to the banked surfaces of The Armory, it was a tough pill to swallow when he ran “just” 49.58 in the 400 qualifying and finished 22nd overall – more than a second from making the final. But it has served as some good motivation to make this spring his best ever.

One of the few other performance setbacks for Woodhall came in the Rio Paralympics last summer, where a dropped baton led to a relay DQ. But he came back and won silver and bronze in his individual events. Now this spring, Woodhall has been faster than ever in the sprints for Syracuse HS, where he blasted to state 4A 200 and 400 titles; in the latter, he defended his ’16 crown and smashed the state record with a 46.24. He’s got the #3 PR of all entries in that event here – behind Tyrese Cooper and Brian Herron – and whereas Woodhall did not have his teammates with him at NBNI, they join him here in the 4x400.

To glance at the online track resume of Karimah Davis is to see one of the longest list of performances of any elite sprinter. It would probably not be inaccurate to say she comes from the Tyrese Cooper school of “why just run two sprints when you can run three?” So 100-200-400 triples have been common since Davis’s frosh year at Palm Beach Central HS in Florida. She also has quite a history at NBN meets, the first coming during the freshman 400 indoors in 2014. Happily, however, Davis seems to be reaching her peak as a senior.

It’s been one revelatory experience after another for hurdler Eric Edwards this year, as he’s risen to the elite level after a less-than-satisfying sophomore campaign in ’16. It started indoors, with a 7.96 over 60m hurdles giving him his first major win at the Arkansas Invite, then lowering his PR to 7.76 for 5th place in the record-breaking NBNI 60H final. The Houston Langham Creek HS (TX) junior took notice of record-setter Trey Cunningham, and began chasing his 110H times this spring. Also like Cunningham, Edwards was named to Team NSAF for the Caribbean Scholastic Invite in Cuba.

Ann Arbor Pioneer HS (MI) junior Britten Bowen may have been the defending D1 state champ in Michigan, but she certainly looked like an underdog when she toed the line for this year’s final two weeks ago. That’s because White Lake Lakeland’s Grace Stark had been tearing the track up to the tune of 13.64w and then 13.54 on her way to state, while Bowen – whose 2016 winning time of 14.08 was into a 1.8 headwind – had a seasonal best of 13.87 and overall PR of 13.81. So it was stunning when Bowen found a new gear in charging to a legal 13.40 clocking, beating Stark’s 13.62 and jetting up to #7 in the U.S. rankings. She has the #4 entry time behind previous national champs Tia Jones, Chanel Brissett and Kaylor Harris (100m dash).

Can Bowen break up that big three? She ran at NBNO last year, taking 10th in the prelims with her previous PR of 13.81. She also ran the 60m hurdles at NBNI this past winter, tying her PR with 8.50 for 11th in the prelims. That came after she was 2nd to Stark in the indoor state meet. Then outdoors this spring, Bowen’s efforts beyond the short hurdles have gravitated more toward the 100 and 200 dashes, as opposed to the 300m hurdles. No doubt, that has helped some with the speed she’s clearly gained. Joined by some talented distance-running teammates in Greensboro, Bowen will also contest a few relays this weekend for the Ann Arbor Youth TC.